I Will… Sam & Christy {Sneak Peek}

Sam and Christy booked me for their wedding what feels like a very long time ago… it must be at least 18 months maybe longer! But I remember meeting them at their home and them being so warm and friendly and excited about their wedding day.

We also discovered that they had got engaged on the same day as us, 10th November 2014, what were the chances, this wedding felt like it was meant to be! They had booked the incredible Hengrave Hall, at the time I had seen lots of images of Hengrave but since I have shot the most gorgeous wedding there and that has made me even more excited for their day.

When they booked their engagement shoot they were still thinking about where they might like to have it. They said they would have a think and let me know. Then around a week ago they got in touch to say they still couldn’t think of anywhere specific they wanted it and did I have any suggestions.  I often suggest the beach as its one of my favourite places to shoot but at this time of year I also adore the Norfolk fields. They had booked a sunset shoot and there are so many amazing fields and big skies near me that I often drive past and rarely get to shoot I suggested they come here.

They took me up on the suggestion and we moved their shoot to later in the evening to take advantage of golden hour. So last night they arrived at mine and we headed off in my car in search of some of the pretty locations I so often pass.

Despite being nervous (especially Christy) they were a dream to shoot. Christy quickly relaxed and we had so much fun in the woods down some country lanes and finished at the edge of this beautiful field.

The sun got a little hazy toward the end but I just adore the golden glow through them and the grasses so this is their sneak peek. I have lots more I can’t wait to share and I am seriously excited for their wedding but for now here is their sneak peek…

Huge thanks to Sam and Christy for trusting my location, driving over and getting a nettle sting or two! I am so excited for your wedding day! 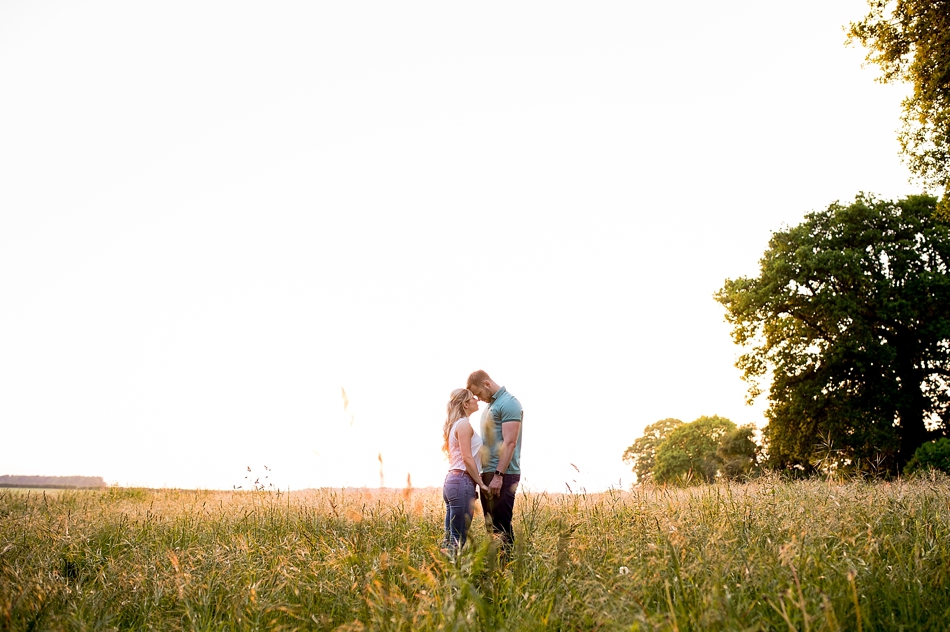